A Bag Full of Scrap Goodies

Hello...I have been away for a while.  There has been too much going on to go into detail, but I am working on projects, every chance I get.  I am also keeping up with blogs and newsletters.  And speaking of newsletters, I was reading the newsletter from Delray Fabrics and they were having a give away. Tula Pink has a new collection called "Bumble."  They were giving away the scraps left over from a couple of small projects.  I left a comment and guess what...The scraps are pretty sizeable.  I have a couple of projects in mind but nothing decided yet.  The colors are really soft and blend really well. They are beautiful. 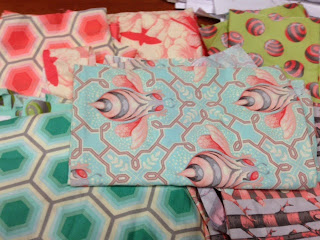 And I guess everyone in the quilt world knows that Bonnie Hunter has revealed the new mystery quilt for this year.  It is called "Grand Illusion" and the colors are based on the Grand Hotel on Mackinaw Island.  If anyone has seen the 80s movie "Somewhere in Time" with Christopher Reeve and Jane Seymour, the movie was filmed at the hotel.
I have about 15 Bonnie Hunter UFOs and flimsies, but I took the bait again.  Bonnie says this one is not as intense as "Celtic Solstice" but we will see.  After many false starts, I came up with a collection of fabrics that I plan to use based on her color selections.  I like controlled scrappiness, so I won't be using as many fabrics as suggested,  The first clue will come out on November 28th...Let me know if you plan to join in.  Here are my color selections: 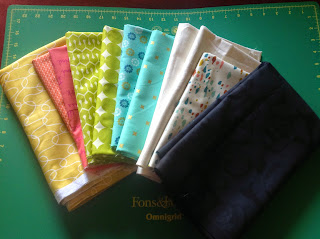 I think there may be a few pieces in the Bumble scraps that will go well with this collection.  I will audition them all to see what works.
The weather is changing here.  Maybe I will get something finished!  Until next time.
﻿
Posted by Livin' Blue Quilter at 4:55 PM 1 comment: Links to this post 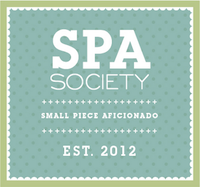